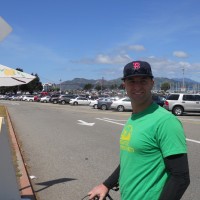 STEVE PETTINELLI  |  stage 1 |  CA
I'm running because I want to honor the victims and support the survivors and their families in any way possible. The One Run For Boston 2 is a non-stop relay to run from Los Angeles to Boston to complete the 3,300 mile journey spanning over a four-week period beginning March 16th till April 8th in support of the One Fund. One Run For Boston has become a symbol of hope and positivity that inspired a powerful grassroots movement, which continues to unite the community. My mom, Donna, brought this link to my attention and since I reside in San Diego, close to Santa Monica, I have signed up to run in stage 1 of the this continental relay race. I have been away from the city of Boston for over 7 years now but I still love the city and miss all the family and friends who remain in the state of Massachusetts. The journey starts March 16th 2014 in Santa Monica with stage 1 of 336 stages. As a group run, Stage 1 kicks off from Santa Monica and ends the 7-mile stage at UCLA Drake Stadium. The final stage of the relay arrives in Boston on April 13th 2014. 8 days before the Boston marathon. I would love for you to be a part of it. I am writing to ask for your sponsorship to help raise funds for the One Fund Boston. Massachusetts Governor Deval Patrick and Boston Mayor Menino announced the formation of the One Fund Boston on April 16, 2013, the purpose of which is to raise money to help those families most affected by the tragic events that unfolded during the 2013 Boston Marathon. My desire is to honor the victims, encourage the survivors and support the families by running in this relay. To sponsor me, simply click on the link below, then click on "sponsor me". http://www.onerunforboston.org/u/StevePettinelli996/ Thank you very much for your thoughtful consideration and generosity in support of the one fund. I am hoping to raise a minimum of $500 for this great cause. With that said, this is phase 1 of my game plan. Phase 2 is to get back and run in the Boston Marathon this year and may need more support down the line but that is still to be determined. Thanks again for everything, Steve Pettinelli
Good Luck Steve! xoxo
$100
Donation by Anonymous Sponsor on Feb 2, 2014
Your bocce teammates
$100
Donation by Sal & Dad on Feb 2, 2014
Good Luck Steve
$100
Donation by Guido & Antoinette on Feb 3, 2014
Great cause - good work!
$50
Donation by Vinnie Cameron on Feb 3, 2014
Good luck, cuz! Hope all is well!
$25
Donation by Meredith Kay on Feb 12, 2014
Nice going Steve.
$50
Donation by Bugsie from the Torre on Feb 17, 2014
Great job Steve, Good Luck .
$50
Donation by Jeff Robertson from the Torre on Feb 17, 2014
A Little Less Conversation Good Luck Hound Dog
$25
Donation by Elvis on Feb 17, 2014
Run your heart out dude! Thumbs way up for you.
$100
Donation by Kyle Kuhlmann on Feb 18, 2014
$50
Donation by Anonymous Sponsor on Feb 19, 2014
RUNNNNNNN FORREST!!!
$100
Donation by Katie Pardee on Mar 16, 2014
Good cause, good man & good luck
$50
Donation by Jimmy "the jet" Graziano on Mar 16, 2014
sponsor me