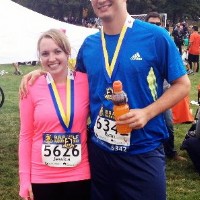 JESSICA ZIEMAN  |  stage 336 |  MA
I'm running because
"When you spot violence, or bigotry, or intolerance or fear or just garden-variety misogyny, hatred or intolerance, just look it in the eye and think 'The good outnumber you, and we always will.'"
-Patton Oswalt
And this is exactly what we did the week of April 15, 2013. This is a day, a week, that will forever live in my memory. On April 15th, I was in a car, riding back from NY to Boston. I saw several Facebook status' about my beloved city, but they were not congratulating the marathon finishers as they should have been. Instead they were about the tragedy that had just struck our city. I couldn't believe it. Was this really happening?
I was planning on going to the finish line last year. The Marathon has been something that I've loved watching from the sidewalk of Commonwealth Avenue. All of the excitement and emotion at the end of such an amazing race- I wanted to see that in person. Instead, I was returning from a long weekend in Rochester, NY and all of my thoughts were with those who were at the finish line.
The next few days Boston had a feeling of unity. I took my lunch breaks outside, looking out over the Charles to the amazing 'Boston Strong' skyline.
Only four days later, tragedy struck once again. This time at MIT, my workplace; and later in Watertown, where I live. I thought fireworks were being set off. Not long after, Ryan and I found out that those "fireworks" were actually gunshots, and they were going on only blocks from our apartment.
Despite the tragedy, the unthinkable acts that happened on April 15th and 19th, our city made it though. We've become stronger than ever. 2013 is a year to celebrate Boston and all that we've done. It's a year to remember the victims and support the survivors.
This is why I'm running. Let's support this amazing city together!
BOSTON STRONG <3
Jessica, what an amazing young woman you are.
$10
Donation by Carol Malloy on Jan 24, 2014
Go, Jess!
$50
Donation by Martha Pughe on Jan 25, 2014
Run Forest Run!
$10
Donation by Karen Pughe on Jan 25, 2014
Look at us go! We're zooming!
$10
Donation by Anonymous Sponsor on Feb 15, 2014
$15
Donation by Katherine Book on Apr 8, 2014
Great gesture on your part - You go girl
$50
Donation by Barb & Dick Zieman on Apr 11, 2014
So glad you joined ORFB fam! See ya at the finish!
$5
Donation by Caitlin Birch on Apr 12, 2014
what a great cause , good job jess love you. xoxox
$20
Donation by mark zieman on Apr 12, 2014
sponsor me